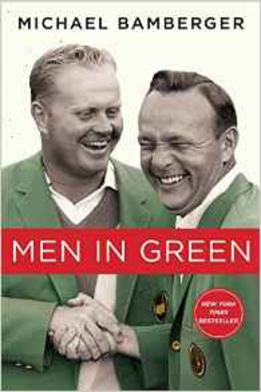 Now, the real Dan Jenkins, who was never an athletic director of anything except his own golf game, is more of a meat and potatoes kind of guy than a rare, roasted parrot kind of guy, which is of course the reason he’s written that comment.
The Wallaces, Pete and his wife Glenda, are on their second poodle and their first English springer spaniel, who apparently was more expensive than a set of golf clubs. Wallace would know because Glenda was a club champion nearly every place they lived. They were in many locations before he became a Big 10 athletic director. Pete met Glenda when he was coaching at Flat Beach State in North Carolina.  He went on to coach at Morris Union College, Forest Grove, Tennessee; and Great Sioux State in Bison River, South Dakota, before being tabbed by Western Ohio University,which recently entered the Big Ten in what he calls the Great Regurgitation, when all the athletic conferences combined themselves into bigger versions of themselves.
Part of Wallace’s reason for wanting to retire early is that he remembered the time when “freshmen were ineligible. Drugs were unheard of.” and it was only important for the varsity players to “handle their cigarettes and whiskey.”  If you are of a certain age, you can feel his pain in this regard.  Also, in his old days, athletes never had personal problems.
You can almost sympathize when Wallace confesses that he sometimes thought of ways for umpires and referees to die in agonizing pain.  How many times has your team lost due to bad officiating?
Now, like all of Jenkins books, this one comes with a language disclaimer.  If you’re not out of college, it’s probably not something that your parents would want you to read, even if every foul word is something you’ve already heard and probably read someplace else.  So, quoting the really good and funny stuff is not possible here, except the part about the rare parrot. Parrots are always fair game.
However, the quips, insults and barbs and making fun of everybody and everything is the fun of a Jenkins book.  There isn’t a sacred cow he hasn’t turned into a cheeseburger.
For instance on going to Maximilian and Carlota’s Taco Wacko: “The Illegal immigration sauce was fabulous.”
For instance, the basketball player who has a photo on the wall of Wallace’s office: Adidas Nike Smith, first team All-American for two seasons before he left to turn pro.
For instance: “The rules of swimming and diving baffle me.  I’ve never understood why an athlete is allowed to win five medals for swimming the same distance five times.”
If you’re younger than 40, Stick A Fork in Me is a sarcastic and humorous imaginary history of college sports the late 20th and early 21st century. In a way, it’s almost educational and definitely a lot of fun..

The title says it all, really, if you know anything about Joann Dost. But if you don’t, she is quite simply one of the very best golf photographers anywhere and has chosen to spend a great deal of her professional life photographing Pebble Beach.  Dost has also been selected by the USGA for a variety of photography assignments for their tournament programs.

Neal Hotelling and James Dodson provide the words to accompany her photos, giving background about the resort and detail on the course.

In conjunction with Samsung, Boeddeker has produced a book of some of the aerial photos he has taken with his camera while atop the crane camera.  Hence, the name, My Office Window.
Easy for him to say.  You do not want to be in his office when the wind is blowing 20 MPH.  You do not want to be there when it's in the 50s on the ground, because it's colder above the treetops. But you DO want to see the absolutely fabulous photography that is a result of some of his journeys.
TPC Sawgrass 17th hole is on the cover, and a very nervous Sports Illustrated  photographer, Fred Vuich, climbed up to the crane cam to take the cover shot, which is the only one NOT taken by Boeddeker.  According to Boedekker, the hard part was figuring out how to strap both of them in safely and still get a the shot .
Courses included are TPC Scottsdale, Honda Classic, Trump National Doral, Bay Hill Club & Lodge, Valero Texas Open, the Players, U.S. Open at Merion and Pinehurst, Deutsche Bank at TPC Boston, BMW at Cherry Hills, Tour Championship at East Lake, Presidents Cup at Muirfield Village, and Northwestern Mutual World Challenge at Sherwood CC.
A portion of the proceeds from book sales go to the Wounded Warrior project.  Find it at www.myofficewindow.org

This is sure to become a golf classic because it has recipes that stoked the fires of a great champion!  They call it recipes and memories because, just like at your house, certain dishes are served at special times of the year of for special occasions.  There are old family photos to prove it.

Perhaps the best recipe is the one Barbara says she got from her mother called the Recipe for Living.  It’s 1 cup friendly words, 2 heaping cups understanding, 4 heaping tablespoons time and patience and a pinch of warm personality.  If you know Barbara Nicklaus at all, you know that describes her perfectly.  Only in her case the warm personality is more like a gallon than a pinch.

My Office Window
by John Boeddeker

John Boeddeker is a TV guy.  He is one of the best in the business at what he does, and he's been at it for more than three decades, currently for NBC.  He's the guy in the crane, the one waaaaay up in the air.  He's so far up that you think to yourself, who the heck is crazy enough or brave enough to go up there and do that??  Well, that's John, who everybody calls Bo.
Recent technology has allowed him to share with us the above the treetop view he sees on a weekly basis.

Men in Green
by Michael Bamberger

Michael Bamberger, Senior Writer for Sports Illustrated, is such a genuinely fluid writer that anything he produces is usually worth reading. As it happens, he writes about golf, making it much more interesting to golfers and golf fans. In Men in Green, which actually includes one woman (Mickey Wright), he and former PGA Tour player Mike Donald embark on a journey to talk to 17 people Bamberger has decided are remarkable legends in golf for one reason or another.

The book begins in earnest when he meets with Arnold Palmer in LaTrobe, PA, and ends after a conversation with Jack Nicklaus.

In between are stories of golfers, golf tournaments, golf conflicts, behind the scenes golf people, things not readily known, beginning in the 1960s and going through the present day.

History is a great part of Pebble Beach, and that information is included. For instance, on the second hole, Bobby Jones was short of the green after two shots in the 1929 U.S. Amateur played against Johnny Goodman.  Jones conceded the hole to Goodman, giving him a two-up lead after two holes.  Eventually Jones lost the match, and my opinion is that may be one reason Pebble Beach wasn’t used for a U.S. Open for another gazillion years.
Most recently, the hole was where Dustin Johnson made his untimely triple in the U.S. Open and lost his third round lead.  The tournament was won by Graeme McDowell.
Every hole has a story, including the sixth, which was a pasture for National Velvet, starring Elizabeth Taylor.  Together with stunning photos, it’s a book that lovers of the game will enjoy.  Available at amazon.com 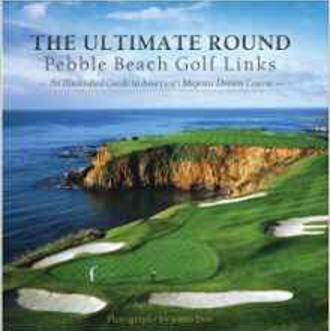 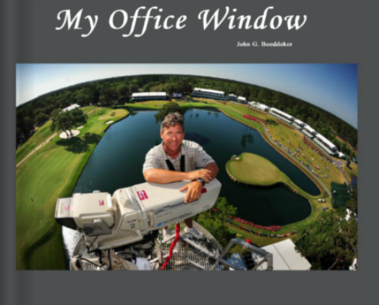 Recipes are in categories of Appetizers, Breads, and so on through to Desserts.  And she features some that were given to her, like the Antipasto Salad recipe that she got from Delores Hope.

“Jack and I were having dinner at the Hope’s home in California,” Barbara writes, “ and Jack commented that he really like the salad. So Delores sent me her recipe.”

Mainly, it’s not fussy food.  Barbara is not opposed to the can of soup here and there, which is common in most households (sorry Julia Child).  She has a Bailey’s white chocolate cookie recipe with macadamia nuts which sounds like it is to die for, and there’s one just called World’s Best Cookies from Janic Savic, Pandel Savic’s late wife.  (Savic was a quarterback for Ohio State and is a good friend of the Nicklauses.)

If you are looking for a recipe that is going to work the first time, use one of these and just don’t worry about it. Barbara would never allow anything bad to come out of her kitchen.  You’ll have to trust me on that.

I was particularly curious to see if there was a recipe for Buckeyes, which is a candy that everybody living in Ohio for longer than two years learns to make.  Even I have made Buckeyes, and I almost never cook, so that’s how easy they are. Basically, if you love Reese’s peanut butter cups, you will love them.  Sure enough there it is, squeezed in nicely between Peanut Brittle and Lemon Squares.  It is actually her mother’s recipe and there’s a photo of her parents next to it.  The only problem with it is buckeye lovers snap them up like they were M&Ms.

Melt butter. Combine powdered sugar and peanut butter in bowl. Pour hot butter over peanut butter mixture and mix well. (You might have to use your hands.)  Place mixture on waxed paper or a baking sheet.  Shape in balls about an inch and a quarter in diameter and place on baking sheet. Cover with waxed paper and refrigerate overnight.
Melt chocolate chips over low heat. Add about 2 tablespoons melted paraffin to the chocolate.  Paraffin allows the chocolate to set with a shine.  Hold each ball with a toothpick and dip balls in melted chocolate leaving an open spot (about a half inch in diameter) on top so it looks like a buckeye. Return to baking sheet. Place a knife in hot water and rub the buckeye top to cover the toothpick hole.  Cover tightly and return to refrigerator. Makes about 70-75 buckeyes.

The buckeye is a tree and the nut of the tree is called a buckeye. It’s encased in a hard shell and it’s difficult to get open, but I bet squirrels have a way.

All the proceeds from the sale of the cookbook go to the Nicklaus Children’s Health Care Foundation.  www.nchcf.org to get yours Get out there and buy one. 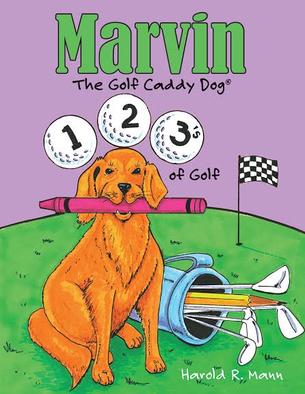 Marvin the Golf Caddy Dog was the first in the series of books by Harold Mann. A stray golden retriever, kind of like Buddy in the Air Bud movies, and a boy named Ted meet on a golf course. Ted makes Marvin his golf caddy dog and their adventure begins. The book is filled with color illustrations of beginning rules of golf in a far easier format than the USGA Rules of Golf pamphlet. 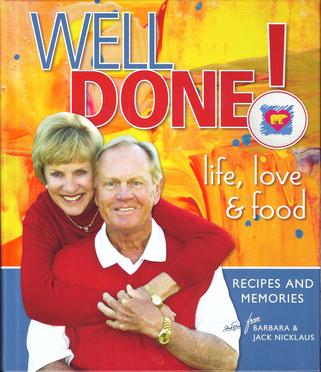 Stick A Fork in Me -- Dan Jenkins

Dan Jenkins latest novel, Stick a Fork in Me, is a hilarious throwback to a time that was simpler, when people like former football coach and now Athletic Director Pete Wallace could still get away with hurling insensitive and insulting remarks to almost anybody and laugh about it. Wallace, you see, is thinking about retiring, and to memorialize his exceptional career, he’s recording his thoughts and anecdotes from his illustrious near past.  He turns on his tape recorder when the spirit moves him.
Wallace likes his martinis with four olives, he says, “in case I run into a prissy chef whose menus feature rare roasted parrot on a bed of cranberry sauce and minced rodent lettuce wrap.” 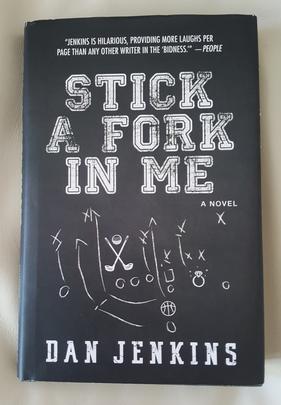